On Monday (9/24), I bought you perfume from Ulta. You’ve needed perfume for a while, so I thought this would be a good treat. You wanted to go in, but I told you that I could pick out the right one (you described to me which one you wanted). Well, I came back with lotion. Oops. I think I did that because I couldn’t think straight when I got hit by a cloud of fruity and flowery smells upon entering the store. I told you that I could get it right the second time, but you insisted on going in with me. So, we  went in together and bought you the right thing. I’m glad that you and the cashier thought my mistake was so funny.

On day 357, I made you a 2013 calendar . . . not. I was actually supposed to make you a calendar on this day, but never did. When I went to make it, I didn’t know what pictures you would want in it. So, I told you that I was making a calendar for one of the acts of love and I asked you if you wanted to help. You excitedly agreed to help. Well, we’re still in the process of making it as you know. It’s going to be epic.

348: Loving Others: Rice and Beans

We’ve been trying to teach our daughters that they’re very blessed to have so much food to eat and so many clothes to wear. I want them to be appreciative of what they have and to be willing to give of their excess to those in need. The best way to get that across to them, I think, is by example. So, for act 348, we ate rice and beans for dinner and took the money that we would’ve spent on the rest of our dinner ($5, we estimated) and we gave it to someone who needed it.

A while back, you noticed an advertisement for some sort of makeup variety pack in an Ulta brochure. You told me that you really wanted it, so I bought it for you for my 342nd act of love. I honestly have no clue what the little bottles and brushes and such that came with it are for, but you were super excited about it, so that makes me happy. When you got it, you kept taking out the various little bottles, dabbing whatever was in them on your finger, then rubbing the stuff on your face. Then you’d look at me and ask me what I thought. Of course I said you looked beautiful. To be honest, though, I think you look awesome with or without makeup. Still, I’m glad you like your little variety pack.

Day 334: Drawing Pictures with Our Oldest

For my 334th act of love, our oldest daughter and I drew you some pictures on construction paper. Unfortunately, I can’t post pictures of them here because I didn’t take any. That’s just as well because I don’t think the world’s ready for my artistic genius.

afOur neighbors told me about some blackberry bushes near our house where they picked some incredible blackberries. I immediately thought of getting some for you for one of my acts of love.

So I went out to do some pickin’. I was excited because I expected to surprise you with a bounty of blackberry goodness. Instead, I presented this to you: 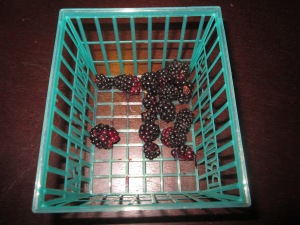 What happened? For one, I had an encounter with a fierce and ravenous beast that made me scream and jump to safety. . . okay, it was a little bunny–but he came out of nowhere, and for being such a little guy, he sure did rustle those bushes! That put me on edge and made me wonder what else was lurking around, waiting for the kill. Two, as I was picking blackberries, I spied some of my vegetal friends with leaves of three. That brought to mind a very unpleasant experience: 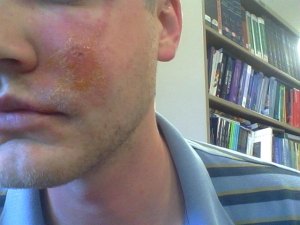 So, I went home with my few blackberries and scrubbed my hands and feet in the tub for about ten minutes. So much for that idea.

Your favorite dinner is my fried chicken, mashed potatoes, and gravy. It’s my mom’s recipe. I’ve offered to teach you how to make it, but you claim that I make it so well no one can duplicate it. So, whenever we want fried chicken, I’m the chef. I don’t mind. I like that this dinner is a sort of special contribution of mine to our family life. Maybe when we’re 70, I’ll still be making you this. 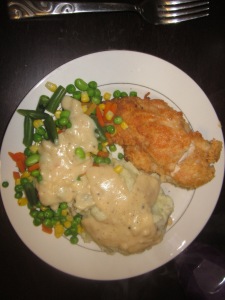 PS: I like that you put gravy on your vegetables. Why go halfway, right? 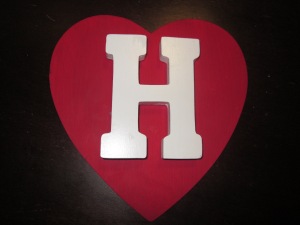 You’ve done a lot of creative, craft-type things with the letter “H” since you took on my last name. It’s nice. I like that you’re proud of your new identity. So I made this to encourage you in that vein.

You are so proud of it. You told me so. Not only that, when I came home from work the other day, you had it hanging on the outside of our front door. That makes me very happy. Sometimes, I try making you something and you display it just to humor me (you’re very nice about it). This time is different. This time, I made you something that you really think is great.

On Tuesday, I made you this banana split: 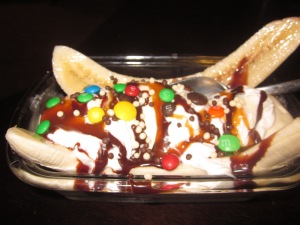 Before I did, I was driving home from a work thing around 9 PM and I didn’t know what to do for my act of love. I thought maybe I could make you some sort of craft, so I dropped by Michael’s. They were closed. Then, I wandered through Albertson’s trying to come up with something. I realized that we had all the ingredients for banana splits except for bananas and whipped cream. So, I bought those things and went home.  Though I try to plan out my acts of love, many of them end up being spur-of-the-moment things. Some of them turn out well that way. Other’s don’t.

After I made you your dessert, I noticed that you’d already made yourself a dessert. That wasn’t ideal and could’ve been avoided if I’d planned out this act in advance. Still, you seemed excited for your banana split.

You were only able to eat half, so you gave me the other half. Lately I’ve been counting my calories. I knew that by eating it, I would go way over my daily calorie limit, but by not eating it, I would waste it. I ate it. That was certainly the right decision. Yum.

I meant to make this video for you on our anniversary, but I finally got around to it on Monday. Anyway, here it is.