On Thursday, I took you to the beach, where we found a bottle with a message in it. 😉 Here’s the message: 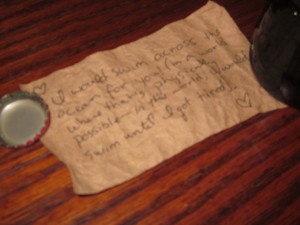 Sorry it’s blurry. It says, “I would swim across the ocean for you (in a world where that’s physically possible–in this world, I would swim until I got tired).”

We almost didn’t go to the beach that day. Before I left for work, I asked you and the girls if you wanted to go when I got home. You all said yes. So during the day I took a break from work and went to the beach and buried a bottle with a message in it near the pier at Goleta Beach. When I got home, everyone was tired and cranky and needing some time apart. I asked you if it was still okay for us to go to the beach and you said that you didn’t think so. So I did what any respectable husband would do: I pleaded with you to let us go. You caved.

When we got to the beach, everyone forgot about their crankiness and had a great time playing in the sand and the waves. I tried to steer us towards the pier, but no one seemed interested. Finally, I got us near the bottle. I unburied it when no one was looking and hoped that someone would find it. Our middle girl did. She picked it up and showed it to you.

“Yuck! Put that down!” you said. “Let me see that,” I said. Our middle daughter gave it to me. “Chauncey, don’t touch that! It’s so gross that you guys are picking up some random beer bottle!” you replied. (It was actually a root beer bottle that I bought at the store. I initially wanted to use some cool antique bottle but I couldn’t find a cheap one. And I didn’t want to pay lots of money for one when both of our grandmas have tons of them just lying around at their houses.) “Look, there’s something in it!” our oldest daughter said. At that point, you took the bottle and examined it. “Gross, it’s a random beer bottle with a cigarette inside,” you said as you threw it on the ground. “No one touch it!”

Then I walked over, picked up the bottle, took off the lid, and dumped the note out in my hand. When you saw that there was a note inside, you rolled your eyes at me. “You did this?! How did you do that? That was very sweet, but you shouldn’t put notes in random beer bottles.” I then explained to you that it wasn’t some random bottle.

Once you were in the know, you were okay with the whole thing and were even very impressed with it.

Here are some pictures of our evening at the beach: 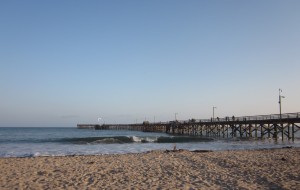 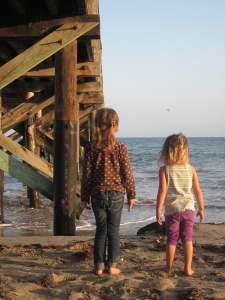 This was candid and cute, so I put it in. 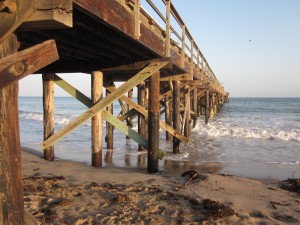