On day 300, I hoped to do a certain big act for you, in line with my tradition for this blog of doing something big or meaningful every 50 days.

In order to do the act, I needed you out of the house for a while during the evening. But alas, I couldn’t make you leave without spoiling the surprise. So, I had to content myself with doing the big(ish) act the next time that you left the house for the evening (which ended up being day 302).

This is what I did instead. I was browsing Better Homes and Gardens–seriously, I was and it was simply for my own enjoyment–when I noticed a recipe for a veggie pizza that looked good. I thought I should make it for you. So I did:

Yours is on the left, mine the right. We actually each had our own personal pizza

Here are the girls’:

One of my friends gave his wife a really nice Mother’s Day. He made her three meals–great meals–and washed every dish he dirtied. For lunch, he took her on a picnic to the best-rated park in Santa Barbara, where they strolled through manicured gardens and spied turtles and baby ducks. Kudos to him.

I took you to Chuck E. Cheese’s. Hurray for me, the king of romance. First, we dined on lukewarm pizza topped with processed chicken, after which I served you by throwing away every Chuck-E-Cheese-printed paper plate we used. Next we strolled along gum-ridden carpets and spied sugar-high adolescents and screaming toddlers.

How did I end up taking you to Chuck E. Cheese’s for Mother’s Day? (Well, technically, it was the day before Mother’s Day, but it was our Mother’s Day celebration. We couldn’t do Mother’s Day on Mother’s Day because I had to work on Sunday.) It all started the week before when we were driving to your mom’s house and you asked me what I was going to do for you for Mother’s Day. I said that some of it was a secret and some of it was up in the air. Just then, our daughter saw Chuck E. Cheese’s and started begging us to take her there (she had never been). “That would be fun!” I said. “Yeah, it would!” you said. From there, my memory of our conversation is fuzzy. But somehow, we decided that we would go there for Mother’s Day. Did I strongly suggest the notion and you reluctantly agreed or did I merely suggest it and you happily agreed? Or did you suggest it? Who knows. But, I distinctly remember asking, “Are you sure that sounds like a good Mother’s Day to you?” And you said yes.

Fast forward to M-Day. You woke up, not to the rising scent of french toast or bacon and eggs, but to the primal screams of our children for Chuck E. Cheese’s. “Chuck E. Cheese’s–where a kid can be a kid!” they cried. Over and over.

After a little discussion, we agreed that Chuck E. Cheese’s would be for the kids and that we’d do Mother’s Day another time. In fact, I’ve set a date for it: May 26th. I know of a nice park we might try.

So goes my version of the story.

PS: The friend I mentioned above was inspired by this blog to do something romantic for his wife once a week. She doesn’t know about this commitment of his.

PPS: Another friend of mine was similarly inspired.

Last night I made us a pizza with a homemade crust, pesto sauce, mozzarella, feta, red onions, and chicken. It was supposed to have avocado, but the avocado that we bought for it went bad.

I modeled this pizza after our favorite pizza from one of our favorite restaurants: Stonefire Grill in Santa Clarita. We have fond memories of that restaurant because we used to eat there when we were dating. Every time we go back to Santa Clarita, we go to Stonefire and get their chicken pesto pizza and barbecue chicken salad. I hope my pizza tasted sufficiently like theirs (sans avo) and that it brought up fond memories. 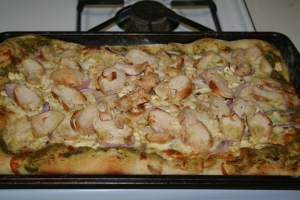 Yesterday, I asked your mom if she and your sisters would watch our kids so that you and I could go on a walk. She graciously agreed. We revelled in being alone together, sometimes talking about life and love, sometimes laughing and being silly, and sometimes simply enjoying each other. I cherish my time alone with you, especially since it’s so rare.

The last time we went out alone was August 19–the day before our 3rd daughter was born. We ate pizza and had a hearty good time, taking advantage of our time together because we knew we were about to enter a hectic time of life. I will not let another four months pass before we go out alone again.

The other day, I won a coupon for a free slice of pizza from a nearby pizza place we like. So last night, I slipped the coupon in your wallet. I hope you enjoy it because I was looking forward to that slice! Then, when I crawled into bed, I noticed that the cup of water you keep beside our bed was empty. You like to keep it full in case you get thirsty at night. I refilled it for you so you wouldn’t have to get up if you got thirsty. I hope these little acts of kindness work together to make a big difference in our marriage.