For our final anniversary date, which occurred on our actual anniversary, I took you on a surprise picnic at the beach.

The night before, as we were sitting on the couch, I (seemingly randomly) declared: “I’m going to bake a quiche.” I thought you would be a bit suspicious about my declaration, especially since our anniversary was the next day and since I’d never baked a quiche nor expressed any desire to. But you weren’t. You said okay and went back to what you were doing. Maybe that’s because I frequently make strong declarations about random things: “I’m going to run a half marathon this fall.” “Would you like a pie? I’ll go make one.” “I’m going to take up swimming.” “Let’s travel around Europe when I’m done with school.” “I’m going to fly planes for a living.” I guess not all of my declarations become a reality. I did bake that quiche, though. Here it is, eggs, bell peppers, feta, cheddar, garlic and all: 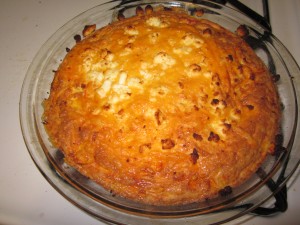 To be honest, I don’t know that it’s a quiche. It could be a frittata or it could just be baked eggs with random stuff thrown in. I really don’t know what qualifies something as one or the other. But let’s call it a quiche—it tasted so great, I think it deserves a fancy French name.

(By the way, I’ve wanted to make you a quiche (i.e., the kind of thing of which the thing pictured above is an instance) for about six months. I’m not sure why. I just had it stuck in my mind to make you one and to eat it with you at the beach.)

But enough of that delectable dish I somewhat arbitrarily designated a quiche. Let’s get back to the date. On the day of our anniversary, I put all of our picnic items together and sneaked them over to our friends’ house. They agreed to set up the picnic for us so that we would “stumble” upon it as we walked on the beach.

When I came back, you asked for some of the quiche. I gave you the small portion of it that was left. “You ate the entire thing!?” you asked. I simply shrugged my shoulders in response. When you were done eating, we dropped our kids off with some friends and drove to Goleta Beach. We started on our walk and soon came upon the picnic lunch. 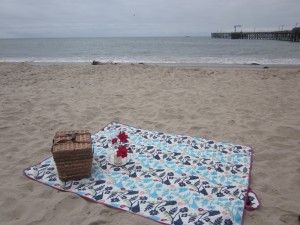 “Hungry?” I asked you as I motioned to the picnic. “This is for us!? How did you do that!?” you said as you jumped to hug me. (With all the crazy surprises I’ve done through 365, I think you now consider me the David Blaine of romance.) After taking about 1,000 pictures of our lunch, we started eating. All the while, people on the beach were stealing glances of us, perhaps wondering what was taking place.

After lunch, we took a walk on the pier. We talked about family life, our marriage, and the possibility of adopting children, and at one point, I ran through these resting pigeons: 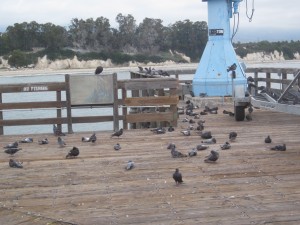 Our three dates proved invaluable, since they provided us with some much-needed time together and without our children (whom we love dearly). Here are some more pictures of our picnic: 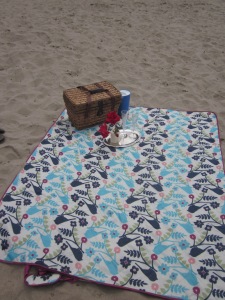 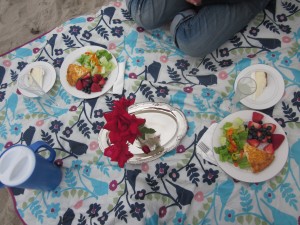 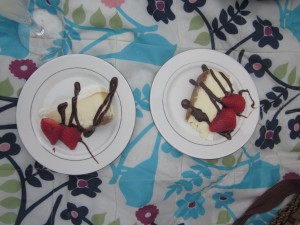 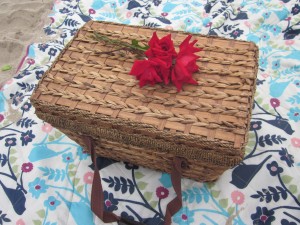 Yesterday, I took a break during my workday to compose a message for you on the sand out of dry seaweed. Here‘s a video of it and here are some pictures: 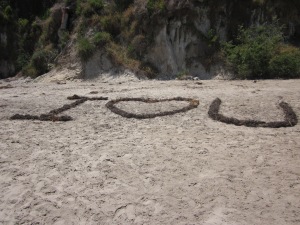 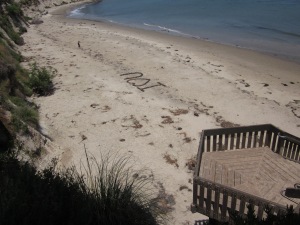 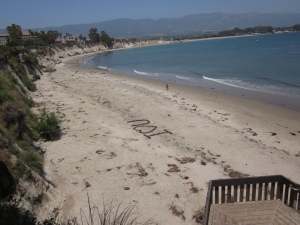 When I got to the beach, there were hundreds of high schoolers there. I almost didn’t make the message because I was embarrassed to do it with so many people around. But I braved on.

When I finished, they took turns standing by it and getting their pictures taken by their friends. Then, all of the hundreds of high schoolers suddenly left, including my groupies. They must have been on a field trip or something.

Anyway, I hope you like your message and your youtube video. This idea isn’t novel, but I don’t think you’ll care.

I finally successfully executed the sunset-at-the-beach act. This time, there were no thugs being tackled on our doorstep and no best friend to distract me from you. We did take along our kids, but that wasn’t a problem: they played in the sand while we talked and watched the sunset. We didn’t take a picture, though everything was beautiful and still. Later, you mentioned to me how great it was that I thought of taking you guys there and how meaningful the experience.

I tried to make up for missing the sunset on day 98 by taking you to the beach at sunset yesterday. I envisioned us having a tender moment watching the sunset while the kids played in the sand. That didn’t happen. Instead, we took one of my best friends along with us and I talked to him the entire time the sun went down while you watched the kids. Lame-o! (It’s my fault, not his. I could’ve enjoyed a moment with you while talking to him.) I can’t really call what I did an act of love, so let’s throw this in the fail bin and move on. Some day I’ll make this sunset-at-the-beach thing work out.

We had a great time with my friend, though, and we’re so glad he came to visit us.

Yesterday we drove up the state for a wedding that’s taking place this weekend. I wanted to start by 6 AM, but didn’t wake up to the alarm. We left by 9 only to stop at your parents’ house to pick up some stuff. That took much longer than we hoped–it’s difficult to get our daughters to leave their grandma’s house. But we finally got on the road. Because of our slow start, you were surprised when I exited the freeway 30 minutes later: “What are you doing? We finally got on the road!” “It’s a surprise,” I replied. I drove us to the beach, stopped the car, and told our daughters that this is where I asked you to marry me. Then I said to you that “I love you. I would marry you again if we could do things over. I’m happy to be with you and our wonderful children.” As we drove off, we talked about the night I proposed. We talked about how you said no when I asked you to go to the beach with me–it was midnight, drizzly, and cold, after all. Your parents knew what I had planned so they insisted we go. You reluctantly agreed. When we arrived at the beach, I nervously walked with you by the surf, hoping to muster up some courage. Then, I got on one knee and proposed (but not before a bat flew between us and ruined the mood!).